Tim Nicolette (MBA 2008) had always known he wanted to make a difference. A class in his second year at HBS—Entrepreneurship in Education Reform—provided life-changing focus. “I had done pro bono consulting work for education-focused nonprofits, so I understood the power of using management and strategic thinking tools in the social sector,” he recalls. In that class, however, Nicolette grappled much more deeply with the challenges and injustices faced by urban school districts in America.

“That realization sparked a passion in me that tied together my love for cities and concern for others in need,” he says.

After graduation, it led Nicolette to a position through the HBS Leadership Fellows Program as Advisor to the Mayor in the City of Boston Mayor’s Office. “I wouldn’t have had access to that opportunity without the program,” he says. “It was an incredible experience to work closely with Mayor Menino and senior members of his administration.” In his role, Nicolette spent time working for the superintendent and CFO of Boston Public Schools, helping address a budget shortfall just after the 2008 financial crisis. “That was my first opportunity to create some of the reform we had studied in class,” he says. “I found myself really compelled by it—I was working with colleagues who were passionate and committed to kids and had the opportunity to make a difference.”

That experience led to four more years with Boston Public Schools following his Leadership Fellows year, first as deputy to the CFO, then as chief of staff to the superintendent. It later resulted in an offer from UP Education Network, a nonprofit founded by Scott Given (MBA 2010) that partners with local school districts, cities, and the state of Massachusetts to restart struggling schools serving the same students in the same facility.

“When I was chief of staff, I worked on a number of district-wide policy and management issues,” says Nicolette, who joined UP in 2013 and is now serving as president. “This represented a tremendous opportunity to get closer to schools and learn what is involved in transforming low-performing schools into outstanding schools. I love the work.”

Looking back, Nicolette credits many things for influencing his career trajectory: “Being part of the HBS social enterprise community, interacting with peers who worked in the education space, and pursuing the position through the Leadership Fellows Program ultimately helped me realize what a compelling need and opportunity there is in the education sector,” he says, demonstrating the ripple effect that one course—and one year—can have on one’s career. 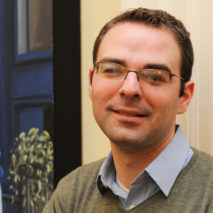