One night during his RC year at HBS, Josh Latson (MBA 2015) shadowed an emergency room physician through his rounds in a busy urban hospital. Josh was there as a member of the school’s Health Care Club, which he had joined to pursue a hypothesis: was there room for a self-identified “finance guy” in health care operations?

The question had long intrigued him. Before coming to HBS through the 2+2 program, Josh had fulfilled internships and fulltime career roles at Morgan Stanley and Goldman Sachs. Three years of undergraduate study at Bentley College had stimulated his interest in finance; a second two years at Yale “taught me the importance of liberal arts,” says Josh, “and I started to ponder bigger questions. What could I do that was important?” On his first day of business school classes, both interests collided in Josh’s first case study, Narayana Heart Hospital. “We explored the challenges of running a specialty heart hospital in India,” he says. “And it hit me – health care is a business. I wanted to do something in operations. Could this be it?”

After four hours of trailing the ER physician, he got an answer. “The doctor said, ‘We need more business people like you.’”

Josh’s initial explorations were a “rough go.” When he looked for internship opportunities, he found that “no one understood why a finance guy would want to go into health care.” He had the same difficulty the following year when he was researching his first post-graduation work role. “I spent every Monday afternoon at Baker Library searching for jobs.”

Then two serendipitous events came together. Just as his roommate extolled the virtues of the fellowship opportunity that would take him to the Boston mayor’s office, Josh found a listing in the Career Hub for a Leadership Fellow opportunity at Boston Medical Center.

Alastair Bell, MD (HBS MBA 2006), Executive VP of Strategy and COO for BMC Health System, notes, “From our standpoint, Leadership Fellows is a way of accessing the great pool of talent at the Business School. It would allow us to infuse different skill sets into BMC – a low risk way of trying out new talent, maybe someone with no healthcare experience at all.”

“The one-year commitment was key,” says Josh. “I was going into a new role, a new industry. It was nice that I wasn’t expected to stay, that I could review my options after a year. I felt comfortable having an exit option.”

As it turns out, neither party has wanted to exercise that option. Now entering his fourth year at BMC, Josh has been able to leverage his fellowship into an in-depth exploration of operations and strategy, with access to the top levels of the hospital’s executive team.

Josh started as a Special Assistant to Alastair, who oversaw a hospital-wide strategy team responsible for a wide range of initiatives. “On my first assignment, I used skills I already had to make a financial model for a new project. Over time, I used a lot of things I learned at HBS. I’d say about five percent of my work drew upon my TOM [Technology & Operations Management] coursework, and the other 95% was LEAD [Leadership and Organizational Behavior].”

Josh was given significant responsibility for investigating the hospital’s real estate options. “He immediately understood and added value to a number of deals,” says Alastair. “But the single biggest value he brought? He was excited by our mission. He’s done everything from M&A analysis to support for your growth strategy, to helping us develop our initial savings targets for our MassHealth Accountable Care Organization.”

“Doing the analysis was part of my work,” says Josh, “but the most important part of the job was getting people on board, influencing them, speaking across boundaries – getting them to understand why this needs to be done now.”

Since completing his Leadership Fellowship, Josh has been promoted, first to Senior Manager of Strategy, then to Director of Strategy. “Opportunities abound,” Josh says. “There are endless possibilities for applying business skills. It’s like a pie-eating contest: it’s up to you say, ‘no more pie!’”

“Being an unbiased third party is actually very helpful,” says Josh, “especially when you work across departments.” The most important contribution of a HBS education, Josh believes, “is helping people think about how to break apart and structure problems. It’s an endless repeat of the case method! You have ambiguous contexts and multiple stakeholders. You have to diagnose the problem, then lead the charge: what do we do about it?”

As he approaches his fourth year with Boston Medical Center, Josh reflects, “This is the best and most rewarding part of the Leadership Fellows Program: that I got to work with senior people at a relatively young age to make a meaningful impact.”

“We feel we get a lot out of Josh,” says Alastair. “It’s not just the work -- the impact of having talent like his radiates out and inspires others around him.” 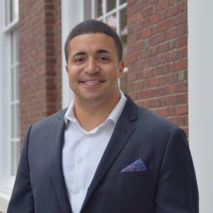