Safeena Husain was the first in her family to attend university overseas—so being admitted to the London School of Economics was cause for celebration, even if her father had to sell his business to pay for tuition and expenses. When many questioned why her father would make such an investment in a daughter, not a son, Husain had a sobering realization about the pervasive mindset regarding girls’ education in her native India—where a staggering 64 percent of Indian adolescent girls drop out before grade 8.

After graduating, Husain worked briefly in Silicon Valley before transitioning to a career in community-based global development, traveling to Latin America, Africa, and South Africa. When she returned to India, she was struck once again by the biased attitudes and disparities around education access faced by school-age girls, particularly in the country’s villages and rural areas.

So Husain took action. In 2007 she founded Educate Girls, a nonprofit organization that mobilizes communities to take a stand against gender disparities in education. The organization leverages existing community resources and members of “Team Balika”—local, educated community volunteers between the ages of 16 and 25—to boost enrollment, retention, and learning outcomes for all girls. Since its launch, Educate Girls has expanded to 4,600 villages with 8,500 schools and has impacted 2.8 million children in Rajasthan. Currently in talks with other Indian states to expand the model, its goal is to increase that number to 4 million by 2018.

“My organization is at a critical stage,” she says. “In the next three years we will further scale to 15 districts, 30,000 schools, a team of close to 2,000 staff and 15,000 community volunteers.” Husain came to HBS to attend the SEI Executive Education course Strategic Perspectives in Nonprofit Management (SPNM) because, “To lead such significant scale and growth, I needed leadership training and support to reduce operational complexity and drive the organization forward.”

Husain doesn’t have all of the answers yet, she admits, but attending SPNM has opened up an invaluable network of HBS faculty and nonprofit leaders facing similar challenges. It’s also helped her ask the right questions regarding Educate Girls’ most pressing issues, including the complexity that comes with operating an organization abroad. “One aspect of my work that I focused on during the program is the formation and structure of international boards,” she says, noting Educate Girls’ recent entry into the US and UK.

While acknowledging the challenges that lie ahead, Husain continues to show the high levels of commitment, energy, and passion her work demands. It’s a journey that began with her father’s investment in her own education—an investment that continues to ripple onward through the changed lives of the hundreds of thousands of girls she has impacted through Educate Girls. 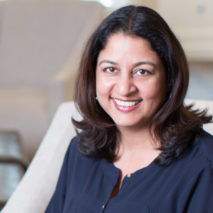