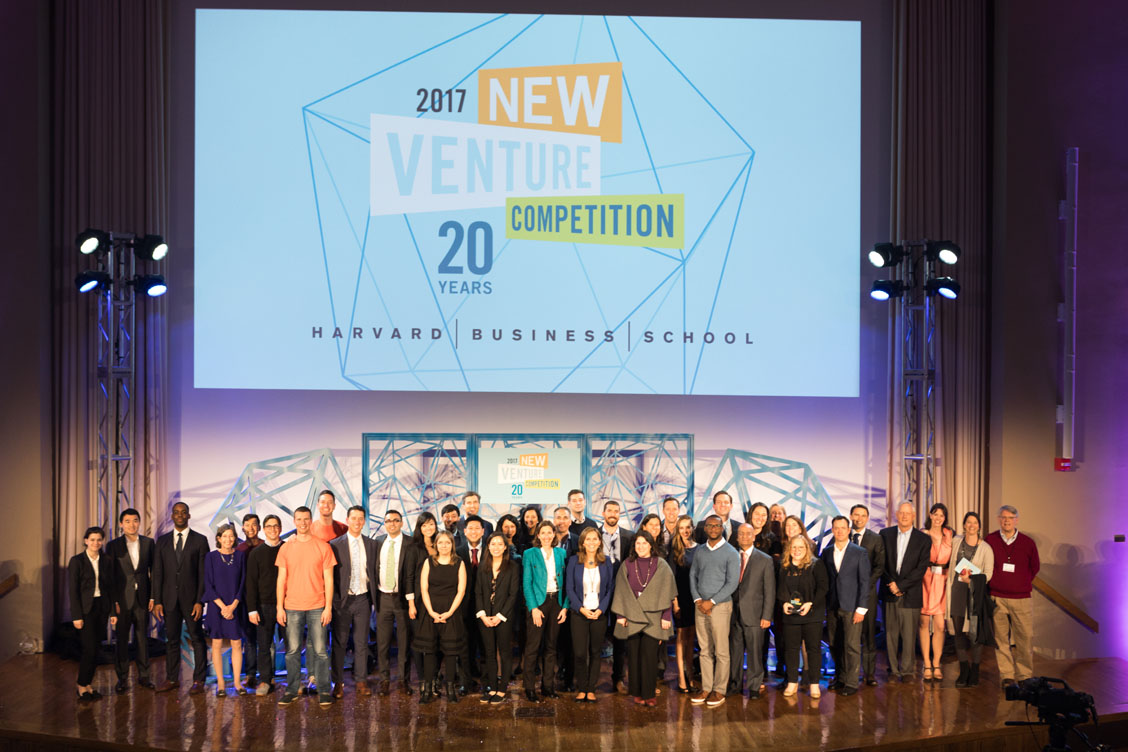 The Social Enterprise Initiative manages the Social Enterprise Track of the New Venture Competition, supporting student ventures that aim to tackle society’s toughest challenges. The SE Track is open to graduate students from across Harvard University, and SEI provides a rigorous and supportive environment for these teams. This year’s 49 entries were a mix of nonprofit, for-profit, and hybrid model business plans, which were narrowed down to 16 semi-finalists and then to 4 finalists before the finale on April 25th.

Amid the bright lights, music, and glitter in Harvard Business School’s Burden auditorium yesterday afternoon, student and alumni entrepreneurs came out in force to compete in the grand Finale of the 20th annual HBS New Venture Competition (NVC).

Pitching before a group of distinguished judges, many of them HBS graduates, the participants were competing for awards totaling more than $300,000 in cash, along with in-kind prizes. To mark the anniversary of the NVC, the event also included a reunion of many past participants as well as a discussion featuring the Competition’s student cofounders and its first faculty advisor, Professor William Sahlman (MBA 1975).

Hosted each year by the School’s Arthur Rock Center for Entrepreneurship and its Social Enterprise Initiative, the Harvard Business School New Venture Competition is open to all students and alumni interested in launching new business and social impact ventures. This year, 283 teams entered the competition--63 in the Student Business Track, 49 in the Student Social Enterprise Track, and 171 team from 30 countries in the Alumni Track.

This year's winners are:

The Dubilier $75,000 Grand Prize: Veho, which aims to replace large delivery trucks with a platform that enables anyone to deliver packages in his or her car. Team: Itamar Zur (MBA 2017), Matt Graham (MBA 2017), Keith Cheong (MBA 2018)

Other finalists presenting at the Finale were:

The New Venture Competition is the capstone event for HBS entrepreneurs,” said Jodi Gernon (MBA 1991), director of the Arthur Rock Center. “Since its inception in 1997, nearly 5,000 people have participated.”

“It is the culmination of a year-long journey that began last October,” added Matt Segneri (MBA 2010), director of the School’s Social Enterprise Initiative. “The NVC’s Social Enterprise Track is 'One Harvard' at its best, since it is open to graduate students across the entire University, while the Alumni Track is an international exposition of entrepreneurial talents.” Director of Alumni Clubs & Associations Mary-Helen Black thanked faculty, judges, and sponsors for their help, support, and encouragement.

Zach Komes August 31, 2021 The HBS Summer Fellows Program enables students to apply their classroom training as they explore career opportunities in roles or regions where compensation is generally lower than the traditional MBA level. This...

Rob Zeaske August 25, 2021 As the Social Enterprise Initiative looks to its next twenty-five years of service to HBS and our community of students, alumni, and global practitioners, we are increasingly focused on good...